Let's summarise some of the main points from this lecture.

We talked about how a robot knows where objects are in its environment. A robot doesn't actually measure the position of its tool tip, it is inferred from joint angle measurements and from a kinematic model.  It knows the Cartesian coordinate of where the tool tip needs to go in the world, and it’s the job of the motion controller to take the tool tip there.

A number of things can go wrong with this process; there could be errors in the sensors, there could be errors in the kinematic model, we may not know the base position of the robot accurately, we may not know the location of the circuit board very accurately.  All of these issues have consequences on the way we construct a modern industrial robot and they generally tend to lead to increased cost.

We can contrast that with the way human beings solve problems; for instance threading a needle. I use my eyes to guide or to steer the end of the thread through the hole in the needle.

If we consider this problem a bit more schematically where we're trying to align the end of two objects, we can consider the task in the three-dimensional Cartesian space and we can also look at that task with a camera. We can look at a two-dimensional representation of that task being achieved.

We talked about how using information from just a single image actually provides insufficient information to reliably perform this task in three-dimensional space. But we can actually perform the task simultaneously in two camera views, aligning the red and blue objects, and if that happens, then in the real three-dimensional world the red and blue objects will also become aligned.

The patterns are fairly distinct but some of them are a little bit similar, and in particular velocity in the X direction is quite similar to the pattern of motion induced by rotation around the Y axis; they look quite similar, but the amount of similarity actually depends on the focal length of the lens.  For a large focal length, the ambiguity is quite pronounced.  As the focal length gets smaller, the ambiguity is much less evident.  This ambiguity between vX and omega-Y, we also see between vY and omega-X, there's a symmetry there.

Let’s recap the important points from the topics we have covered in our discussion of optical flow and visual servoing. 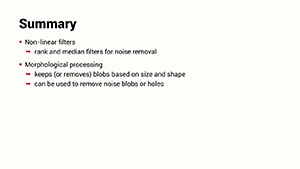 Other Sources of Light

Position and pose in 2D 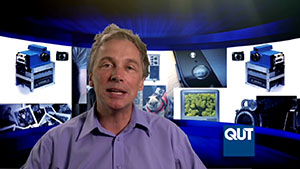