We could then write down a sequence of elementary transformations, which we could expand and multiply out to come up with an expression for a homogeneous transformation which represents the pose of the robot’s end effector. So, we did it for a simple planar robot with just two joints and we also did it for a robot with four joints whose end effector moves in three-dimensional space. We did this for a number of robots that move in two dimensions and in three dimensions, and hope you got the idea about how you can write down this transformation expression almost by inspection, just by looking at the robot and, in your mind, walking a coordinate frame from the base of the robot through each of the links and each of the joints until it get to the end effector. It’s a very simple and very intuitive way of writing the expression for robot end effector pose.

We use a very similar table for a more complex robot like the Puma 560. The table still has four columns, but now it has got six rows, one row per joint of the robot. So, the most general way we can describe the kinematics of a robot arm is in terms of the kinematic function K and the parameters of this function are the joint configuration vector. And remember, that is a vector that contains either joint angles or joint offsets in the case of a prismatic joint, and a number of other vectors. We have a vector of joint angles, a vector of link offsets, a vector of link lengths, and a vector of link twists, and a vector of joint types whose elements describe whether the corresponding joint is revolute or prismatic.

Denavit-Hartenberg notation allows us to describe links and joints by a group of four elementary homogeneous transformations and we stack them in end on end, one group per joint of the robot. In the case of a robot where all the joints are revolute, we substitute the elements of the joint configuration vector, the vector Q in to the corresponding Theta elements. For the case of a robot that has got a prismatic joint as shown here. We substitute the corresponding joint configuration element in to the corresponding link of set element, in this case, D2.

The robot kinematic function tells us the relationship between the frame 0 and frame 6. And frequently, we might want to relate frame 0 to some sort of factory or world reference frame. So, we introduce a base transform that tells where link 0 is with respect to our world reference frame, and we denote that by Psi B. The forward kinematic function gives us the pose of frame 6 and frame 6 is typically attached to some sort of mounting plate or flange on the end of the robot. The actual tool, the thing that does the work, is attached to that particular flange. So, if we want to know the pose of the end of a tool, the end of the thing that’s doing the work which I’ve denoted here by frame E, then we introduce another relative pose. I call this KsiT and that stands for tool transform. We can write a pose expression for the pose of the end effector with respect to the world frame in terms of the base transform, the forward kinematic function, and the tool transform.

All robots have got a finite workspace. That’s the set of all reachable end point positions. All industrial robots come with a diagram like this in their data sheet which shows quite clearly the parts of the workspace that they can and cannot reach. In robotics, we’re interested in two kinematic problems. The forward kinematic problem has been the subject of this lecture, and that is given the joint angles, what is the pose of the robot's end effector, the robot’s tooltip. The subject of our next lecture is the inverse kinematic problem. That is given, when I have to design pose of the robot’s end effector, what joint angles do I require?

We summarise the important points from this masterclass.

Getting an Image Into MATLAB 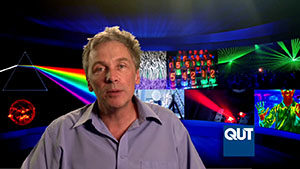