Let’s summarize some of the main ideas that we have learned in this lecture. There is an important distinction between a path and a trajectory. A path is a spatial construct and tells us how we get from A to B through the world. A trajectory is a path plus a schedule. It tells us how quickly we should move along the path, at what time we should be at what point along the path. It’s important with trajectories that the position and orientation vary smoothly with time. We do this for a number of reasons. We want to reduce the maximum acceleration on the robot, allows us to reduce the size of the motors, and it perhaps reduces vibrations induced in the structure of the robot. What the smooth mean would mean that the position is continuous as a function of time and velocity is continuous as a function of time. And, we would hope that the acceleration is continuous and perhaps the jerk is continuous and so on up through higher-order derivatives.

In robotics, a common technique for generating a trajectory is to use a polynomial, typically, a quintic polynomial which has got six coefficients which lets us independently specify six boundary conditions, the initial and final position, initial and final velocity, initial and final acceleration. And, we can write this simple matrix relationship which gives us the coefficient values as a function of the trajectory time, capital T, and the boundary conditions. There is, however, a performance problem with polynomial trajectories and that is that the peak velocity is almost twice the average velocity and we’re wasting motor performance and effectively taking twice as long to get where we want to get to.

A more efficient trajectory is what’s called the trapezoidal profile where we have some acceleration phase followed by a coasting or constant velocity phase, followed by a deceleration phase. A slight disadvantage of the trapezoidal profile is that the second derivative, the acceleration is discontinuous, but it has many, many other virtues and very, very commonly used in robotics and machine tool control. If we want to move from one point to another through a few intermediate points which we call via points or way points, then in order to achieve continuity in the path, we need to introduce what are called blends and they are shown here in red. We introduce an acceleration period to transition from the velocity heading towards, for instance, point 2 in to the velocity we need to head towards point 3. The disadvantage being we never actually get to the point that we’re heading for.

We talked about how we cannot apply this simple interpolation scheme to rotation matrices. Rotation matrices are special. They are orthogonal matrices. So, adding two of them together does not result in another orthogonal matrix. So, we don’t do this to rotation matrices. Instead, what we can do is convert our rotation to a set of angles. It could be Euler angles, it could be roll, pitch, yaw angles, and we can interpolate those. We introduced the direction problem. When we’re interpolating an angle from an initial value to a final value, it’s important to remember that there are two ways we can travel around the circle. We can travel the long way which is shown here in blue, or the short way which is shown here in red through the value of Theta equals pi. We can interpolate quaternions. We need a more complex formula in which to do this. Interpolation, once again, is a function of S and S varies from 0 to 1. And, an important parameter in this interpolation is Theta which is determined from the parameters of the initial and final quaternion. Quaternion interpolation provides the shortest and most direct path between two orientations.

We summarise the important points from this lecture. 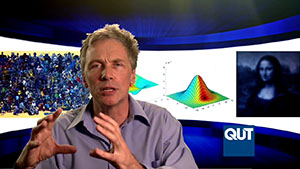