Lets summarize some of the points that we’ve talked about in this lecture.

Today we take for granted that we can use GPS to determine our position anywhere on the surface of the planet, but it is a relatively recent technology. It only became operational in 1994, and only became available at reasonable accuracy for the general public in the year 2000.

Before the advent of GPS, navigating precisely on the surface of the planet or in outer space was very very difficult, and the technology that was used was called inertial navigation, and that involved measuring the acceleration and angular velocity of a vehicle, and integrating that over time to determine the position.

The key components of an Inertial Navigation System are: an inertial measurement unit; which contains the sensors that measure acceleration, magnetic field, and angular velocity, and what’s called dead reckoning software; that takes those signals and integrates them over time to continually update the pose of the vehicle.

At any particular point on the surface of the earth we can establish a right-handed coordinate frame where one axis points towards the north geographic pole, another axis points vertically downwards towards the centre of the planet, and the other axis points in the geographic east direction. The earth’s magnetic field vector is shown here by a red arrow, and it can be described with respect to this coordinate frame by two angles. Magnetic declination is the difference between two directions; the direction of true north and the direction of magnetic north - the direction that the compass points in. The other angle is magnetic inclination, and that’s the angle that the magnetic field vector makes with respect to a local horizontal surface. It’s also referred to as magnetic dip.

A spinning disc has some interesting dynamic properties. One of these is that we can use it to convert an angular velocity - omega - about the blue axis, into a torque - tao - about the red axis.

Interestingly there are biological equivalents of accelerometers and gyroscopes in our bodies. In each of our ears we have two accelerometers and three gyroscopes which measure the motion of our body, and that’s integrated with visual information in our brain to understand how we are moving with resepect to the world.

The skew-symmetric matrix has got a number of interesting properties. In particular it’s singular. That is, its determinate is always equal to 0, and its transpose is the negative value of itself. In the case of three dimensions, as shown here, we can clearly see a zero diagonal, and the fact that the matrix only contains three unique elements, x, y and z, Each of which appear once with a positive sign, and once with a negative sign.

We recap the important points from this masterclass. 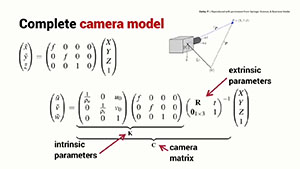