Coordinate frames follow the right-handed convention, the X axis and the Y axis are related like this. If we have 2 coordinate frames the relative rotation between them is defined like this, angle increases positively in the anti-clockwise direction. Points can be represented as vectors with respect to particular coordinate frames and in our notation we denote a vector by lower case p, and the preceding label indicates the frame that the vector is with respect to, and the trailing label indicates the destination of that vector. So in this case the A denotes the fact that the vector starts at the origin of frame A and it goes to the point B.

We can describe the relationship between two coordinate frames in terms of pose. And pose is something that has got three parameters: it's got a translation, the X and Y component and the rotation which is the theta component. We can consider it as a simple motion, a translation and a rotation. Graphically we denote pose by a thick vector with a triangular head. Symbolically we represent it by the Greek letter ksi. The left-hand label indicates the frame of reference and the right-hand label indicates the destination pose. So in this case there's a saying this is the relative pose from coordinate frame A to coordinate frame B.

We introduced a spatial algebra. The important things is to note are that we can compose or compound two relative poses using the O+ operator. The O+ operator is not commutative so ksi 1 O+ ksi 2 is not equal to ksi 2 O+ ksi 1.

We have a concept of a no pose that's a zero relative motion. If we add it or we subtract it from a pose it makes no difference, the original pose is unchanged. And we introduced a negation operator, the O- symbol, and that is equivalent to the inverse motion of X ksi Y, the motion from frame X to frame Y, the negation of that is motion from frame Y to frame X.

And we also introduced the dot operator which transforms a vector from one coordinate frame to another.

Composition of poses for which we introduce the abstract O+ operator is performed by matrix multiplication. We multiply the two 3 x 3 matrices together to yield a new 3 x 3 matrix.

The abstract operated dot which we used to transform a vector from one coordinate frame to another is implemented by multiplying the homogeneous transformation matrix by homogeneous representation of that vector.

We summarise the important points from this lecture. 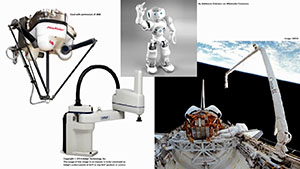 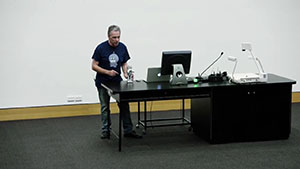 Creating an Image From Code

Build your own 3D coordinate frame