What I have in front of me here is what’s called a quadrotor. It is a flying robot. It’s got four propellers. And, by controlling the speed of the individual propellers, I can make the machine go up, down, left, right and so on. Really critically important to control a machine like this in the air is a sense of balance knowing its orientation in 3D space. So, it has an inertial measurement unit on board. So, somewhere inside this large stack of electronics, there is a board that looks something like this. This board contains three accelerometers, which allow it to determine its roll and pitch angle in space. It contains three gyroscopes which measure its rotational velocity around three orthogonal axis. And, it contains a three-axis magnetometer, so it can determine its orientation where it’s heading with respect to the Earth’s magnetic field.

Now, this little board is customised for this particular quadrotor. A commercial product that performs exactly the same function is a device like this. It’s got a USB port that plugs in to a computer, but internally, it contains three accelerometers, three gyroscopes, and three magnetometers. Now, this same functionality exists in very compact form inside almost all modern smartphones. And, this enables the smartphone compass application so it can find north, it can determine roll and pitch angles. It’s sometimes used for game control and so on.

Imagine now that I’m standing in a lift or an elevator, and I’ve got a very simple dynamical model for my body. It consists of a mass sitting on a spring. The mass represents the mass of my body situated at a point at my centre mass and it’s sitting on a spring which represents the softness of my lower body and my legs. Now, as the lift starts to move upwards, we feel momentarily heavier, that is the weight pushes down on the spring. And, as the lift comes to a stop, we feel momentarily lighter and this is because of inertial effect. It means that it wants to maintain its current velocity. So, when we start off, it wants to maintain its original 0 velocity and that’s what causes it to lag behind the person moving up in a lift. And, that compresses the spring, it make them feel heavier.

As the lift slows down, the weight wants to keep going at the vertical velocity of the lift and that causes that spring to extend and causes us to feel a little bit lighter. Here is a small modern inertial measurement unit, the type that’s quite commonly used in a variety of robot systems. Inside the little box are a number of sensors including accelerometers. So, let’s look inside the box and see how an accelerometer works. And, it looks just like the example we studied before. It contains a mass and a spring. As the body of the accelerometer accelerates upwards, the weight extends the spring. And, as the accelerometer decelerates, the spring pulls the weight upwards. So, the extension of the spring is linearly related to the acceleration of the body of the accelerometer. This is the fundamental principle underpinning all acceleration sensing devices.

And, for a spring, we know that the force is proportional to the extension of the spring, and we can imagine that as x increases, I’m extending the spring and it is pulling upwards with a greater and greater force. Now, we can combine these equations and do a little bit of rearrangement and simplification. And now, I’m able to write an expression that relates the extension of the spring, x, to the acceleration of the body, a, and the gravitational acceleration, g. It’s really important to note that it cannot tell the difference between acceleration of the body, a, or gravitational acceleration, g, and this is something we’ll return to in just a moment.

The standard gravity value is taken as 9.80665 meters per second squared, but note the significant variation depending on where you are. The low cost accelerometers that you have in your phone and perhaps in the navigation system in your car are based on micro-electromechanical system technology and the whole device is etched out of silicon. The inertial mass or proof mass is supported by flexible spring legs. In the case of horizontal acceleration, the inertial mass will move sideways. And, the change in position is measured capacititively using these sensors here. It’s really useful to be able to measure acceleration in three orthogonal directions aligned with the x, y and z-axis of a right-handed coordinate frame. Today, you can buy tri-axial accelerometers as a single chip. It contains three MEMS accelerometer sensors, electronics, analog to digital converters, filters and a serial IO capability so that you can very easily connect it to a microcontroller.

You may not be aware that you have accelerometers in your head. In the inner ear assembly in each of our ears, there are a pair of accelerometers. And, the physical principles underlying these biological accelerometers are just the same as those we’ve already been talking about. The proof mass is a bunch of calcium carbonate crystals and they are referred to as otoliths, which means literally ear stones. They are sitting on a gelatinous membrane which serves as the spring. And, embedded in that gelatinous membrane are a bunch of hair cells and they measure the displacement of the otoliths with respect to the inner ear. We have two of these accelerometers in each ear, one is called the utricle and one is called the saccule. And, they are oriented almost orthogonally, so one senses the acceleration in the horizontal direction, and one senses the acceleration in the vertical direction.

We learn the principles behind accelerometers, sensors that measure acceleration due to motion and due to the Earth’s gravitational field. 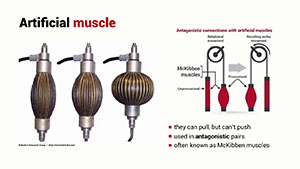 Position and pose in 2D

Rate of Change of Pose in 2D